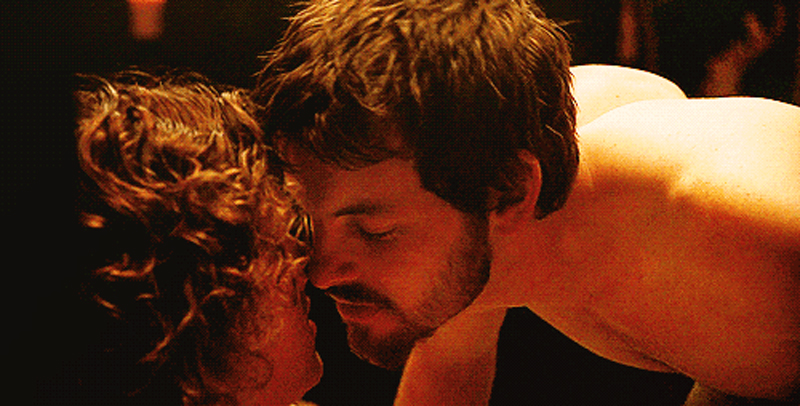 In this episode, everyone was caught in the act.

Our two groups of heroes attended a recruitment meeting of the Greenroots and Cottagers at The Safehaven Inn in the South Ward. After Lorbrin Cooper and Shava Moonwhisper finished their inspiring speeches, and just as attendees turned to Malcer Brownwater to sign up for the cause, the City Watch burst into the cellar. Or tried to. With a moonbeam from Carric Nailo, a blast to the crotch from Clara Arundel and verbal threats from the towering shadow of Valravn, the Watch were forced back into the streets as the everyone escaped through a secret hatch. As some members of our two parties held off the Watch, the others helped with the evacuation. When that was complete, Elf Cottager Finithin Nix led Carric, Clara, Val, Viola, Xavi, and Ges to a safehouse and an impromptu get-to-know-you session. 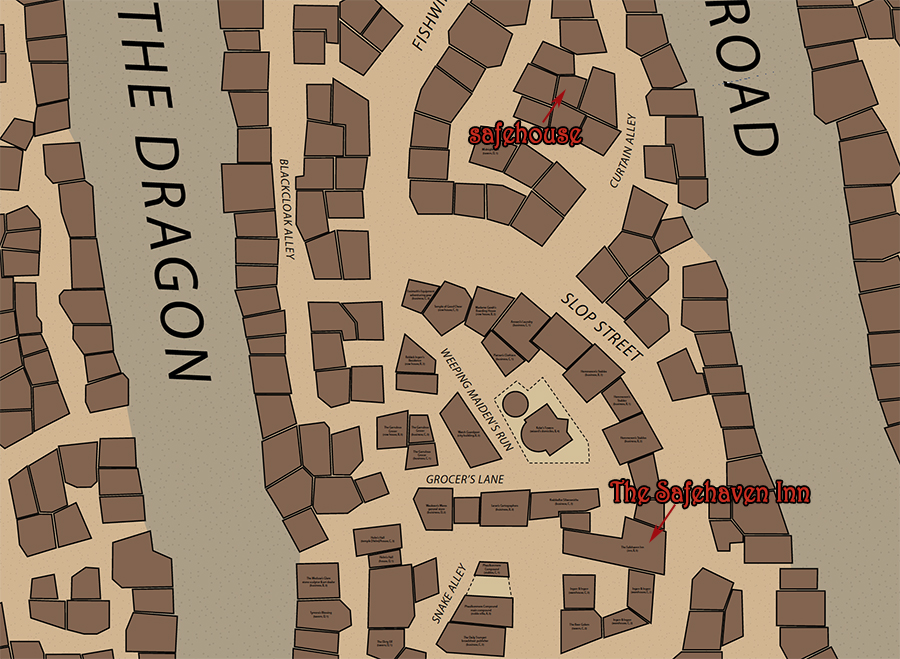 Fin probed into everyone’s interests and intentions regarding the potential revolution, giving these two sets of heroes a chance to learn a bit about each other, as well. Xavi argued that all cities eventually lead to corruption and destruction on the level of the land of Thay. Clara stressed that not all nobles are terrible, but that all commoners deserve protection. Viola was ready to take down the establishment. Carric seemed supportive of the Greenroots’ general position. Ges seemed interested in a better life for the regular folk. Valravn adamantly opposed any action that might result in the death of innocents.

Fin also revealed his own story, including his life as a courtesan for the nobles and just how disgusted he’d become observing their lifestyle and attitudes. He’d been coming to Cottager meetings for a few months, and his commitment caught the eye of some of the group leadership. When asked about said leadership, Finithin revealed that there is an inner circle that rotates its membership. Lorbrin and Shava are currently in that inner circle, and Fin promised to bring this promising group of adventurers before them the next night.

By the end of the night, it became clear that more than just the Safehaven Inn meeting had been disrupted; meetings all over the city had been raided. The question has been raised: is there a mole in the movement? These raids led to the capture and imprisonment of many attendees, and Carric strongly suspects Igald, Priest of Silvanus to be among them.

Everyone met at the weapon-stocked Red Sails warehouse in the Dock Ward that evening.

Finithin pitched his plan to kidnap one of his clients, Bardryn Sarich. Sarich is in love with Fin and has revealed that he’s a Masked Lord of Waterdeep. Clara and Viola jumped at the chance to capture and question such a powerful noble, but Ges was absolutely opposed; the rest of the group landed somewhere in-between. In the end, they decided to catch Sarich in the act (there’s that theme again) with Fin and interrogate him at his residence. But Geswanolith objected strenuously and decided he would sit this one out. 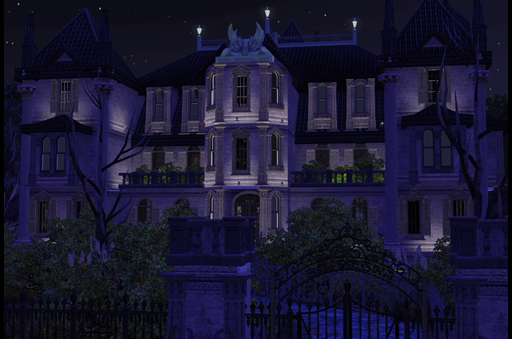 Getting to the house was easy that night, primarily because Sarich had to be sure it was easy for Finithin to enter as well. Sneaking in through the back door to the kitchen, Val, Carric and Clara went upstairs while Xavi and Viola went hunting for information (and goodies).

Sarich was gagged and blindfolded while Fin’s face was buried in his posterior when his world was turned upside down. A huge half-orc pulled off Sarich’s blindfold and named herself as Razkeda Urugur, assassinator of Chancellor Arwin Hume in Silverymoon. That revelation and the placement of his trembling courtesan against a sharp blade left Sarich a quivering mess. He revealed that the Masked Lords 1) don’t know each other’s identities, 2) have a meeting in 9 days at the High House of Roaringhorn, and 3) are keeping prisoners from the meeting raids at Southfort Keep. Carric forced Sarich to agree to seek information about the mole in the movement and then meet at the Broken Lance at midday 8 days hence. The intruders “took” Fin as leverage.

Downstairs, Xavi and Viola rummaged through the expansive rooms of the mansion, stealing a couple silver statues and politely knocking out the butler before finding Sarich’s office. Viola snagged some fancy letter openers and the family seal while Xavi took a pile of papers dealing with Sarich’s business and land. They also took a letter half-written to Garlan Arundel and gave it to Clara afterwards.

In the debrief after their home intrusion, Carric argued strongly for the next move to be a prison break of the Southfort Keep. 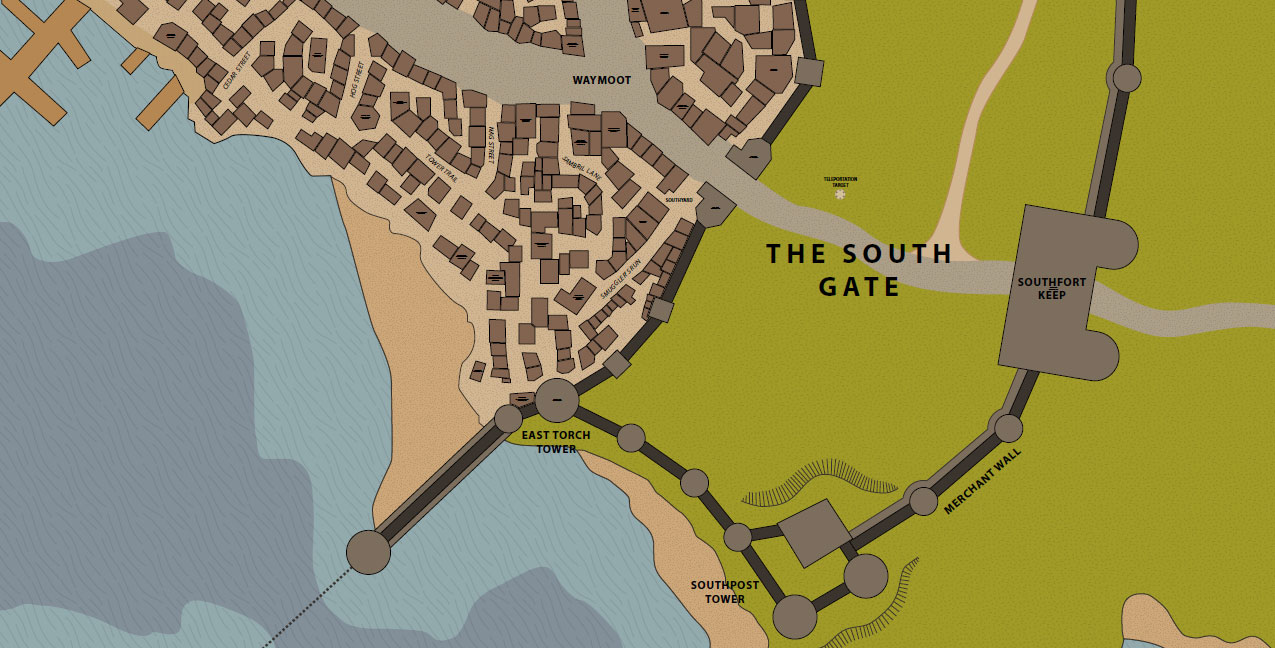 First, though, he wants to scout it in animal form and alert Igald of help being on its way. There is some skepticism among the group about the wisdom of this act.

Will our heroes become criminals? Will they be caught in yet another act of treasonous uprising? Find out in the next chapter of The Leviathan Coast.

Our first three days in town.