Finithin Nix has served many a nobleman (and a few noblewomen) at The Pink Hydra over the last 20 years. And by “served,” he doesn’t mean drinks. He means his penis.

This was only meant to be a part-time gig, but the money, the gifts, the attention of the upper class—it became an easy life to maintain. But over the last couple years, the charm has worn off. More and more, he’s noticed the callousness and the greed—and sometimes the sadism—of his wealthy clientele. He’s noticed his disposability, too.

The way the lords and ladies talk about the lower classes, the way they treat them; it’s become too much. Why should they get to buy whatever they want, use whomever they want, simply because of the luck of their birth?

One of Fin’s co-workers turned him on to the growing Cottagers movement about six months ago, and he’s really taken to the idea of self-governance and ending the rule of the noble class. (There are also a lot of hot guys at the meetings, like Ges.)

His dedication—and his access to the noble class—has made Fin a valued asset of the Cottagers. And he’s never short on big ideas. One of these days, the movement will take him up on one. 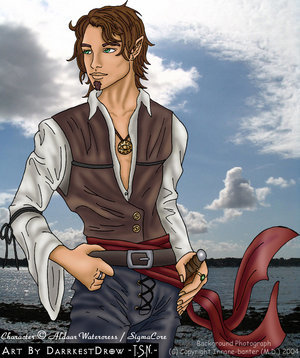