A devout monk of Mystra

Xavi Pegason is the last member of a nomadic tribe from The Great Dale in the Unapproachable East. Every member of his family and village died in a horrifying attack by a demon cult.

He was raised by a priest, Quoril Silverkin, from Rashemen’s Mulsanyaar Plateau who had been fighting the cultist. Xavi grew up among nomadic shamans who worship Mystra, Lady of Mysteries, Mother of All Magic. He became a devotee early on and was trained by the clerics and by the wychlaran (“wise old women”), the spiritual guides of the Rashemi people, as a monk of Mystra.

As an outsider, he has to prove himself again and again, and over time developed the deep devotion of a convert. For Xavi nature provides omens, signs to the morally correct course of action, and especially to the flow of magics, as signs from Mystra.

The clerics worshipped magic as the source of strength to fight the demonic evil and cultists of Bane, Cyric and Shar, and most importantly to fight the necromancers and Red Wizards of Thay, both of which sought to undo the natural order and clan solidarity of the people of Rashemen. He is proud of the role that Rashemen plays in protecting Faerun from the ambitions of the Red Wizards.

He grew up with a deep hatred of Thay, and judges anything less than uncompromising opposition to Thay and the Red Wizards who rule Thay as a sign of ignorance or weakness. He is also suspicious of any centralizing political order, having been raised among nomads that were targets of subjugation by Thay.

The sole exception is Aglarond, ruled as it was by Mystra’s daughter. Xavi does not want to wait for the Red Wizards of Thay to come to Rashemen but has decided against the wishes of his order to go and confront the plots of the Red Wizards directly. His experiences of other polities has made him suspicious of civilization.

Xavi generally sneers at civilization, finding it too willing to compromise with evil for continued comfort. Even in his devotion to magic, he is more trusting of the intuitive magic of sorcerers and suspicious of the learning based magic of wizards.

The only political faction he has sympathy with is the Emerald Enclave, respecting nature as he does. Xavi always remembered his village and sought to understand the world he came from, leaving the Mulsanyaar Plateau and his adopted tribe first to explore the Great Dale and then the rest of Faerun in hopes of learning new ways to thwart the Red Wizards. 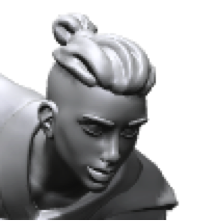