The City of Waterdeep

Known as the City of Splendors, Waterdeep is one of the largest and busiest cities—and one of the most important political powers—on the continent of Faerun. The population is primarily human, although other races dwell therein. The city government consists of a cryptocracy of (mostly) anonymous individuals known as the Masked Lords of Waterdeep.

Waterdeep was founded by local tribes who benefited from trading timber and furs with southern merchants, and the settlement’s deep harbor gave the city its name.

The city grew and grew, such that by 1248 DR both the City of the Dead—a sprawling cemetery complex—and the various trade guilds had been developed. The Guildmasters seized control of the city that year, ushering in a period of bitter conflict known as the Guildwars. The Guildwars ended only when the two surviving Guildmasters made a pact to end the unrest. It was only in 1273 DR that the present system of government was instituted and the secret Lords of Waterdeep were firmly reestablished. 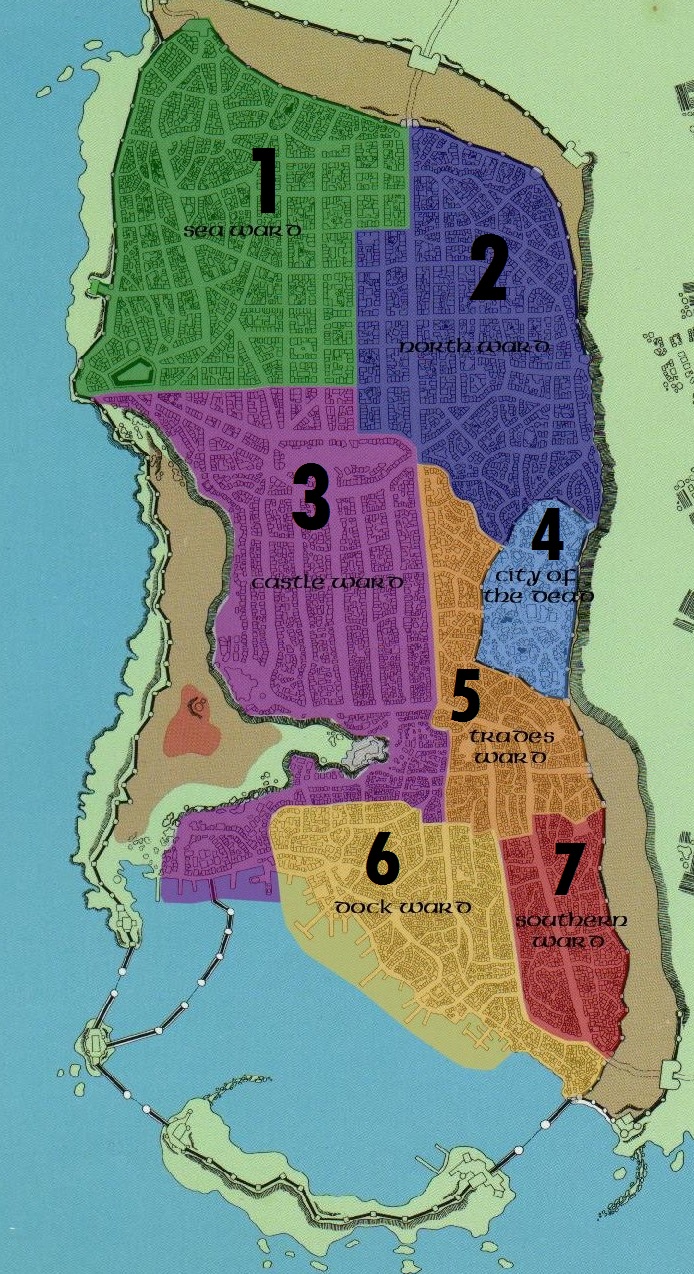 The wealthiest of the wards, Sea Ward contains many of the temples of Waterdeep, along with the homes of newer noble families. The Field of Triumph, Waterdeep’s arena, is located here.

North Ward is the home of the nobility and contains their villas and parks. Everything here feels far removed from the hustle and bustle of the docks and Southern Ward.

This central ward encompasses Mount Waterdeep and much of the government of the city, including Castle Waterdeep. This ward is also a common retirement spot for adventurers past their prime.

This park-like area is the city’s graveyard and is surrounded by high walls/gates that are open during the day and closed at night.

As one might assume, the Dock Ward is situated on the Great Harbor of Waterdeep and contains the docks, shipbuilding yards and warehouses for the sea trade.

Officially known as the Southern Ward, but only nonnatives refer to it as such. The densest part of Waterdeep, it houses most of the working and lower classes of the city. There are plenty of inns, food stands, brothels, card houses, and other less savory endeavors.

Waterdeep is ruled by a council whose membership is largely secret. These hidden Lords of Waterdeep maintain their identities behind magical masks; while they rule in public, none know the true identities of any but the Open Lord, a member who agrees to serve publicly before stepping down. The subject of the Lords’ identities are is a common topic of conversation, and some consider it a game to discover their identity—a game made more confusing by the fact the Lords themselves float their own rumors.

The Lords appear in public only in the Lords’ Court, hearing all cases of murder, treason, misuse of magic, and appeals from lower courts. On such occasions there are always at least four Lords present, but sometimes six or seven are seen, and occasionally as many as nine. The Open Lord chairs the Court and asks all questions; the Lords speak through him. Even among themselves and in chambers, the Lords are rumored to be masked and robed.

Waterdeep has both a standing army (the City Guard) and a police force (the City Watch). Though they often work together, the average person will most often come into contact with the Watchmen, and see the Guardsmen only at city gates, manning the walls or boarding ships for harbor inspections.

Waterdeep services a variety of faiths, including temples dedicated to Gond, Lathander, Mystra, Oghma, and Tymora. There are also shrines to Silvanus, Mielikki, Chauntea, and Lliira. Rumors persist of cult temples and shrines to dark gods hidden away beneath the streets of the city.

View a list of the Noble Families of Waterdeep

The City of Waterdeep

by: faletti
See All Pages